Greater Sensitivity than the Human Eye!

With a conventional front-illumination structure, the metal wiring and transistors on the surface of the silicon substrate that form the sensor's light-sensitive area (photo-diode) impede photon gathering carried out by the on-chip lens, and this has also been an important issue in the miniaturization of pixels and widening optical angle response.
A back-illuminated structure minimizes the degradation of sensitivity to optical angle response, while also increasing the amount of light that enters each pixel due to the lack of obstacles such as metal wiring and transistors that have been moved to the reverse of the silicon substrate.

Faster than the Human Eye!

The key to increased speed of Sony's CMOS Image Sensor can be found in parallel signal processing. CMOS sensors have analog-digital (A/D) conversion circuits that convert analog pixel signals into digital signals (Figure 1). Speed is increased by arranging thousands of these circuits in a horizontal array and allowing them to operate simultaneously. The A/D conversion circuits used in Sony's CMOS sensors have important characteristics, including the reduced size of the analog circuits in which noise is created, and automatic noise cancellation. This circuit design enables noise reduction to be combined with enhanced speed. 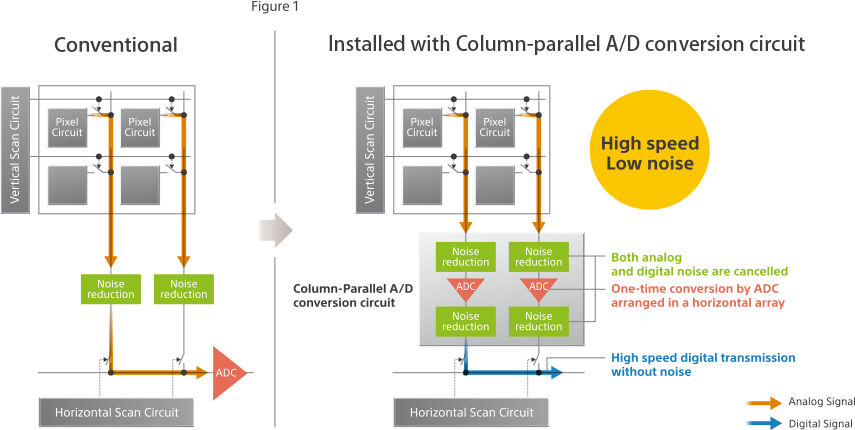 Source : Article and pictures from sony-semicon.co.jp.